What Is The Blockchain Network Commission?

Using digital assets to pay for goods and services on the Internet is a current trend that is actively gaining momentum. And one of the main reasons for the popularity of bitcoins and other cryptocurrencies as a means of payment is the low transfer commission. The commission isn’t fixed, it doesn’t depend on the amount of payment and can be calculated individually. So what is the blockchain network commission? Who gets it? How much will you have to pay for the transaction? In this article, we consider all financial issues.

What Is The Blockchain Commission?

1. It goes to support miners/validators who help fix the payment process and confirm transactions in the blockchain. Miners, when processing a payment, first choose transactions with the best ratio of size of commission — this way they increase their own profit.

2. An important factor is ensuring the security of the network, protecting it from spam attacks. It works as a tool against hackers trying to attack the network by initiating numerous simultaneous operations. And since it’s too expensive to launch several thousand transfers with a commission, it deters intruders. Initially, payments could be sent not only with a commission, but also for free. The waiting time for confirmation of free transactions didn’t exceed 25 minutes, but with the growing popularity of cryptocurrencies, the number of payments has increased, and the commission has become mandatory. Cryptocurrency transaction commissions cost depends on the used network. For example, Bitcoin, Ethereum, Litecoin and Tether (USDT) have different transaction commissions.

How Does The Cryptocurrency Transfer Algorithm Work?

The transfer of digital assets is performed online, and when it is sent, it’s checked whether the transaction is correct and whether the user has a sufficient amount of cryptocurrency to perform the operation. If everything is in order, then the transfer is:

● Sent to a kind of “waiting room” (mempool);
● Included by the miner in the preliminary block — it can contain about 2,500 transactions, since the block size is limited to 1 MB, so with high traffic and high activity of the blockchain network participants, an impressive queue is formed, which automatically increases the payment processing time; ● Evaluated in terms of priority — payments with a high commission are processed first (usually it indicates the importance and urgency of the transfer);
● It is confirmed and goes to the mined block.

The speed and cost of the transaction depends solely on the miner, whose algorithm is based on the fact that the priority parameter for confirming transactions is the amount of payment offered by the sender for making the payment.

What Is The Role Of Miners?

Sending and receiving payments in cryptocurrency is implemented with the help of miners. These are special programs that register and confirm transactions in the blockchain. Using mathematical calculations, they “sort” the transfers that are in the queue and assign them a certain priority depending on the amount of the commission. After that, the transaction is confirmed or remains in the queue — the transfers with the highest commission are among the first to receive confirmation. All transactions in the blockchain are anonymous, so it is impossible to track users, but the process of queuing, sorting and confirming transactions is not closed. With the help of specialized services (for example, Blockchain), you can monitor the workload of the blockchain network in real time (here and now), namely:

What Else Affects The Size Of The Commission? 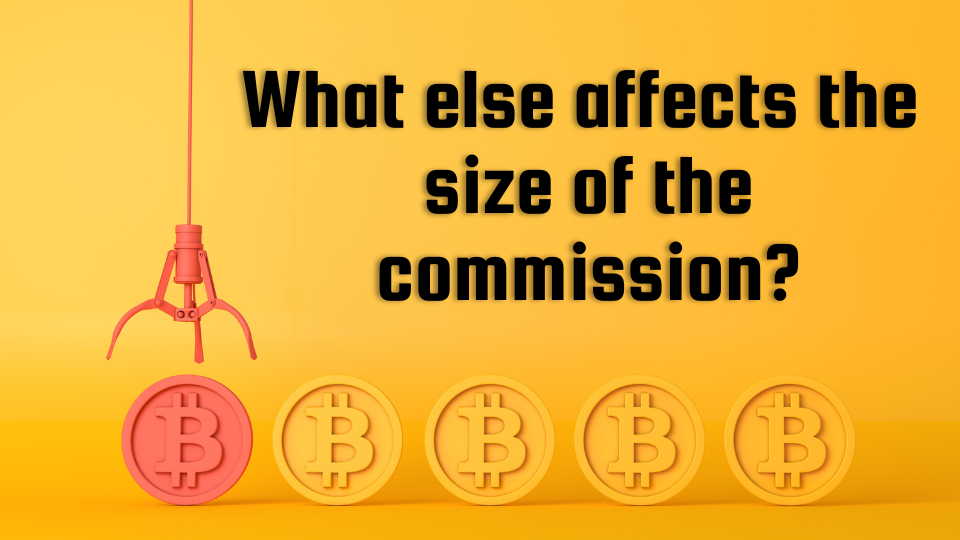 The size of the commission is impacted by the workload of the blockchain network, as well as the urgency / importance of the transaction. But there are other factors, including:

High commissions make it unprofitable and impractical to pay with cryptocurrency on the seller’s website for minor purchases, such as a cup of coffee in a coffee shop or an order in a fast food restaurant. In this case, the commission may be more than the purchase amount.

Is It Possible To Reduce Commission Costs?

The desire of users to reduce the size of the blockchain network commission for the transfer of funds is quite understandable, but trying to do this, don’t blindly trust the advice of various monitoring resources. It’s better to delve into the topic yourself and learn how to calculate the commission correctly so that transactions take place without freezes. Commissions are not displayed directly in the blockchain, so the sender has no way to find out the true cost of the operation. But you can solve the problem if:

You can check the queue of pending transactions and the minimum commission amount for already confirmed transfers on the Memory Pool. And if you specify a commission for your transfer slightly higher than the minimum one, the chances of a quick transaction will increase.

There are no universal ways to reduce the size of the blockchain network commission, while avoiding the transfer freezes. It is worth studying the issue better in order to learn how to determine the optimal commission amount and not overpay, paying attention to the following factors:

Transactions With a Minimum Commission Are Real!

The ability to determine the amount of commission when paying in such a way that the transaction doesn’t “freeze” waiting for confirmation comes with experience. And for companies and online stores wishing to work with crypto, it is better to use cryptoprocessing services to optimize their activities.

The connection will take no more than an hour, and you can start using the service immediately after registration. Network commissions vary based on which cryptocurrency you are trying to send and how busy networks are. Withdrawal commission depends on a cryptocurrency you are operating with. For example, the commission for withdrawal in TRON is 1 TRX, but there’s no commission for some currencies (such as Bitcoin or DASH). It was made to simplify the process, there’s no need for you to think about paying the network commission anymore, as this is already included in the withdrawal commission.

To know about withdrawal commissions for other cryptocurrencies, click here.