How Does A Blockchain Technology Work: Everything You Need To Know In Simple Words

Even though nowadays everybody heard of blockchain at least once, not all know how it works. In this article, we will explain what is blockchain technology in simple words.

What Is Blockchain Technology?

So what is blockchain technology in simple terms? Blockchain generally defined as an advanced database technology. All the data stored is public and is easily verified. All the blocks are connected to each other. Share the access with your reliable business partners and they will be receiving the same information about the transaction in chronological order. Access to the chain is prohibited for unauthorized users. It’s an immutable ledger for many purposes.

What Are The Advantages Of Blockchain

Blockchain technology brings many benefits. There are the main ones:

➜ Advanced security
Blockchain uses the three principles of cryptography, decentralization, and consensus to create enhanced security. There is no single point of failure, and a single user cannot change the transaction records.

➜ Faster auditing
With Blockchain, records are available for every participant and always ordered by time, which makes audit processing much faster.

Disadvantages are present as well:

➜ Scalability
Contrary to their centralized counterparts, blockchains have limited scalability. The more nodes participating, the slower the transaction is.

➜ Storage
Blockchain ledgers have the potential to become extremely large over time. The size of blockchains seems to be growing faster than the size of hard drives, and the network could lose nodes if the ledger gets too big for users to download and store.

➜ Security
Blockchain offers greater security than other platforms. However, this does not imply that it is entirely safe.

➜ Privacy
Despite being anonymous and encrypted, all network nodes have access to data on a public blockchain accessible to everyone.

➜ Power Use
Blockchain’s energy consumption is very high due to mining.

➜ Private Keys
Blockchain’s dependence on its users is a limitation – if the keys are stolen there’s no other way for the user to access their funds.

➜ Data Immutability
The immutability of data may be a disadvantage too. If someone uses a blockchain-based digital platform, they can’t erase its record.

How Is Blockchain Used In Cryptocurrency

Cryptocurrency and blockchain are inseparable. Basically, Blockchain is the foundation of crypto. It even allows cryptocurrencies and almost all of the services created to manage them to exist. Thanks to that, selling, buying and trading in crypto is available to us.

Eventually, the development of blockchain is driven by cryptocurrencies because cryptocurrency relies on its network. Blockchain is not only used for financial purposes, though – many other innovative solutions are based on blockchain technology.

How Does Blockchain Technology Work

The complex mechanism of blockchain may be explained by the following steps:

2. Gain consensus
At the start of the network, participants must agree that the recorded transaction is valid. 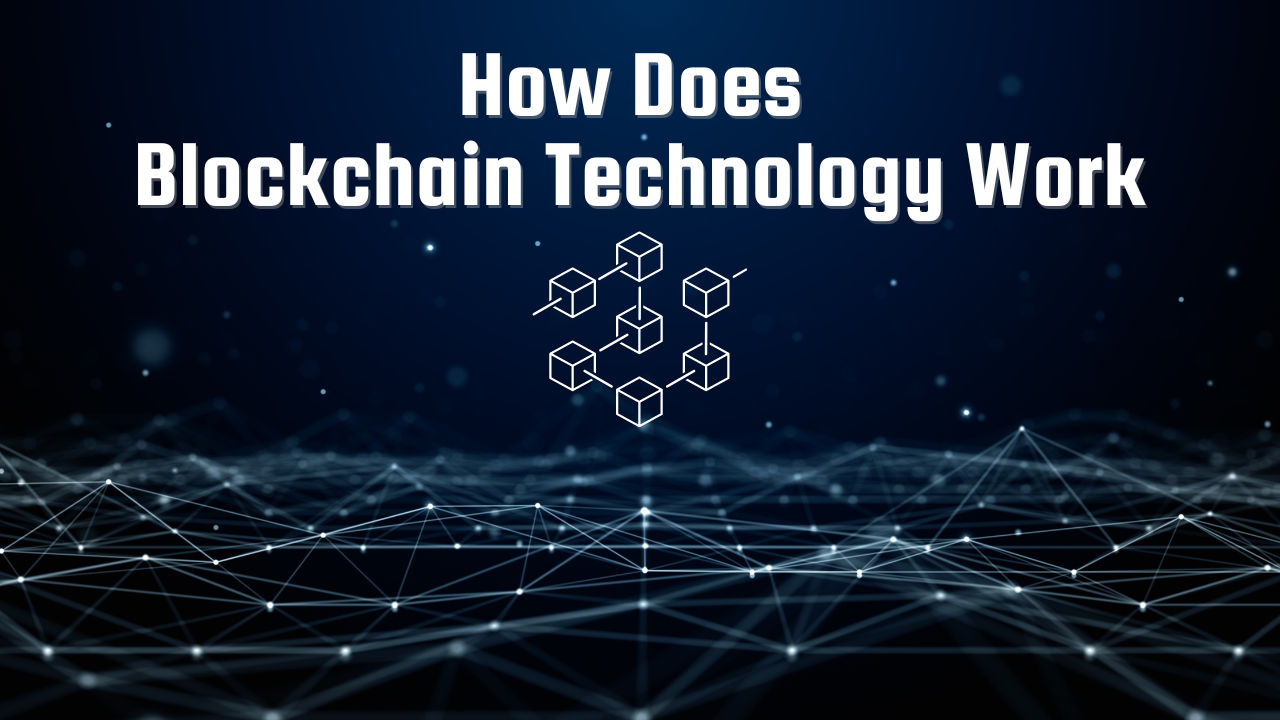 3. Link the blocks
Once the participants have reached a consensus, transactions are written into blocks. These blocks are linked to each other with the hash. Because of the hash, data tampering is easily detected as the hash value changes when data is being modified. Blocks are linked securely, and each additional block strengthens the verification of the previous block.

4. Share the ledger
The latest copy of the ledger is shared with all participants.

Scientists Stuart Haber and W. Scott Stometta described blockchain technology in 1991. They aimed to create a tool for time-stamping digital documents to avoid tampering. They developed a system of a secured chain.

Later, Merkle trees were integrated into the technology, making the chain more structured by the ability to connect several documents into one block. It stores many data blocks, each one being a part of the one before it. The newest record contains the entire record history. Although, the technology went unused.

In 2004 the Reusable Proof of Work system was introduced by Hal Finney as a prototype for digital money. The system worked by receiving a non-fungible Hashcash-based coin as a reward. Then, the token could be transferred between users.

In 2008 Satoshi Nakamoto elaborated on the distributed ledger theory. He modified the blockchain system by improving its design. The design he developed is still being used for storing crypto transaction data.

There are four types of blockchain structures: 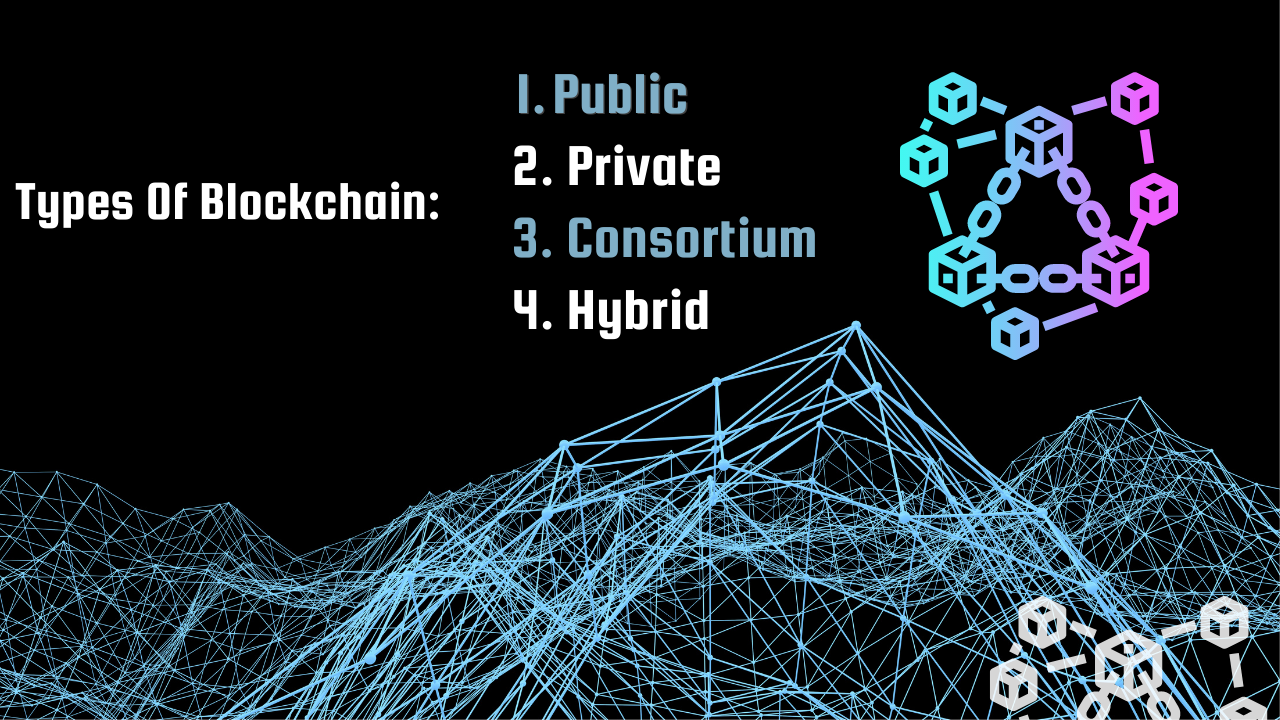 1. Public Blockchains
In simple terms, this type of blockchain is usually characterized by having no restrictions – anyone can join, read, write, review, and download the protocol anytime. There are often offers incentives for validators.

The big community of participants keeps it safe from cybersecurity issues, as the more participants, the safer blockchain is. Public blockchains are completely decentralized so all nodes can create new blocks and validate them.

However, it’s impossible to change the data already put into the chain – blockchain is immutable. The main drawback of this kind of blockchain is that validation tends to take time.

2. Private (or Managed) Blockchains
Private blockchains are much faster in comparison to public ones, which are provided by lesser nodes participating. Public access is restricted, only the central authority determines who can be a node. These blockchains are partially decentralized and controlled by a single organization. Because of it, equal rights are not granted to all of the participants.

The drawback is that managed chains are more vulnerable to fraud.

3. Consortium (or Federated) Blockchains
Federated Blockchains are rarely focused on cryptocurrency and often being arranged for other projects based on blockchain. These chains are governed by groups of organizations. Only pre-selected participants are accepted and each of them has equal power. Each participant will be verified in advance and excluded by the other participants in case of malicious actions.

It’s rather difficult to set up consortiums as it requires cooperation between a number of organizations, which may lead to logistical challenges.

4. Hybrid blockchains
Hybrid blockchains are controlled by a single organization, but with the ability to communicate with all shareholders. The qualities they share with private blockchains make them able to achieve low transaction costs as it takes only a few participants to validate. The mixed nature provides controlled access and freedom at the same time. The architecture of hybrid blockchains is completely customizable and the rules may be changed at any time.

Even though Blockchain is known to be a secure technology, there are still some drawbacks waiting to be improved.

Transactions stored in the blockchain are not encrypted so everybody has access to it. This may be troublesome as it may lead to regulatory and legal problems in some cases. The solution is to encrypt this information, but if the key is lost, there’s no way to decrypt it back correctly/ Bigger problem may emerge if the key is stolen.

However, blockchain can also help to improve cybersecurity. Such problems, as MITM attacks, data tampering, and DDoS attacks are successfully avoided with the help of blockchain.

Blockchain Examples And Use Cases

The application of blockchain technology is diverse, let’s look at some examples:

• Smart contracts
It’s like our regular contracts, but a middleman is not needed. This saves time and money for businesses.

• Internet of Things (IoT)
The Internet of Things opens a new era of smart household appliances. Control your fridge, robotic vacuum, or even coffeemaker from any distance. By the way, the Machine Learning technology is extremely helpful in that very case. A smart home enabled with both blockchain and machine learning algorithms is easily monitored and can be adjusted according to personal preferences.

• Personal identity security
Protect yourself from identity fraud by keeping your personal data on a decentralized blockchain ledger.

• Logistics
Shipping companies are using technology to manage the supply chain by tracking it around the world using blockchain technology.

• Non-fungible tokens (NFTs)
Thanks to blockchain, consumers can now claim sole ownership of some of the most desirable digital assets.

• Government
The technology is used to store government documents, which significantly improves the efficiency of bureaucratic work. It also may be used to make elections simpler.

• Media
To secure your media pieces from being stolen you can tokenize them using blockchain technology.

In the article we discussed what the blockchain is, how it was created and what blockchain may be potentially used for. In one sentence, blockchain has many applications, not just in finance, and the development what can we do using the technology is very revolutionary. Hope you have learned something new!